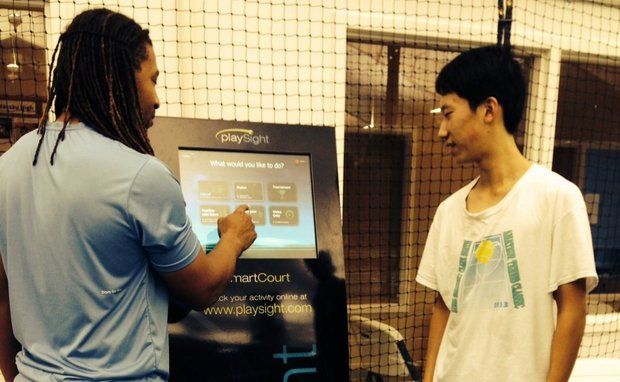 Technology is the new wave of tennis, and it’s getting more sophisticated.

Rackets, strings and court surfaces have made great breakthroughs. Coaches of professional players are using more scientific data. Video analysis is now a common tool. Babolat has come out with a new racket, priced at $399, that collects statistics during play. SAP, an application software company, and the WTA Tour just made an announcement in the past week about a continued collaboration on innovative technology to analyze performance and optimize strategy. ‘Virtual Coaching’ is becoming a buzzword. Apps for the iPhone apps, such as Coach’s Eye, are used to chart matches.

Now, it’s going local. The Nassau Tennis Club in Montgomery installed the new SmartCourt by PlaySight, which is Israeli-based, making it one of only 20 installations in the world. Now, average club tennis players will have access to the same type of feedback about their games as the pros. Coaches and players alike are already benefiting from this powerful tool.

It consists of five cameras to capture data and a courtside kiosk to retrieve it. After logging out, your information goes right to your e-mail, so you can then have the same details at home. It recognizes such things as the difference between forehands, backhands, direction of ball, net clearance, the ball speed and how many yards you’ve run. You can isolate numbers, like how many backhands went in or how many forehands you missed and then watch the video of just those shots. It actually calls “out” when the ball is out.

There’s a court view, a player view and a 3D view. In the 3D view, dots show where your balls landed, and it is color-coded by what kind of shot it was. You can see a rally from behind Player 1 or Player 2 or be the ball. After a hitting session, you can select Debrief on the machine and choose different modes, such as practice your serve, practice your strokes, match mode or video only. Your stats from each session will stay with your profile, so that you’ll always have access to them. 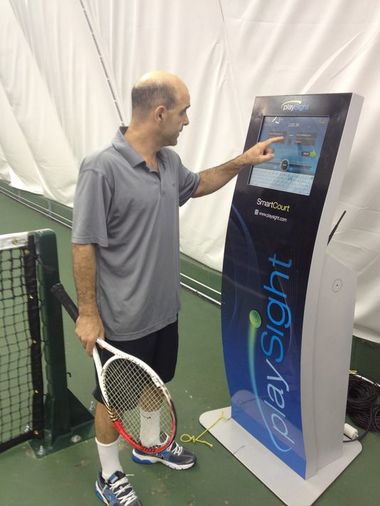 Nassau’s installation took place in November, about four months after Joao Pinho, the

manager of tennis operations, saw a demonstration in a New York club. He gave me a brief demonstration, and it didn’t take long to see that it was simple to operate and just as impressive as it’s been to all the kids and parents who have been privy to it so far.This day, high-school player David Zhang was hitting with pro Marc Hill. Both are loving this new tool, which may be adding a doubles function soon.

“It gives me a look at my strokes from a different perspective,” Zhang said. “When I’m hitting, I’m not aware of some things. I might think I’m doing it right, but I’m doing something I didn’t even know.”

Most of the installations are in the New York area, but one is being installed at Roland Garos, and the numbers are about to really grow. The club pays an installation fee and then monthly dues. SmartCourt hasn’t been made widely available to the Nassau club members or general public yet. In the short term, they have about 50 players, mostly high-level juniors, testing it. Soon, price points will be developed and made known to all levels. There are plans to add the technology to additional courts. Then, all one has to do is register online at playsight.com and call the club and reserve the court.

“Everybody is really excited about the ability to see right away what they do real time,” Pinho said. “The words of the coach with the image makes my life a lot easier.”

The technical breakthroughs in general are revolutionary. Babolat has been working with the International Tennis Federation (ITF) on rules, and the ITF now allow the use of player analysis technologies during official competitions.

There may be caveats to look out for. I checked in with former New Jerseyan Mike Sell, who now coaches top American John Isner. He reiterated that video analysis is a tremendous resource, if used appropriately and is a great resource for showing court positioning, shot selection, strategy and to scout opponents. He also pointed out that developing a highlight reel of all the positive points played in a match can be a huge motivation.

“The biggest misuse of video analysis is when coaches get too technical with their student, give their students too much information or where the pro tries to copy the stroke of a pro player into their student,” Sell said. “Each player is different, so while certain fundamentals of a stroke should be the same, students add their own flare. You have to know what type of learner your student is and how he/she processes that information.”

This entry was posted in Technology of Tennis. Bookmark the permalink.